SportHQ Futsal Academy is a Futsal Club that focuses on using Futsal as a tool to develop outdoor soccer players as well as introduce them to the game legends grew up playing. Players like Lionel Messi, Christiano Ronaldo, Pele, Neymar Jr, Andres Iniesta, Luis Figo, Ronaldinho, Filipe Courtinho, Ronaldo, and many others attributed their player development to the game of Futsal. 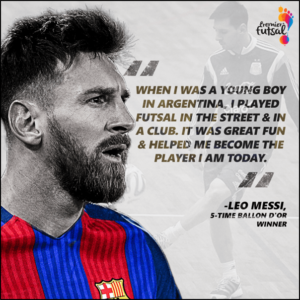 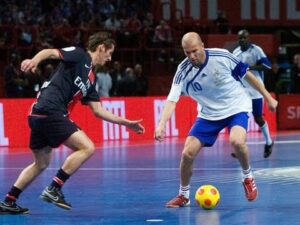 Playing futsal is one the best ways to develop your soccer skills.  Futsal is a fast-paced game played with a weighted, smaller ball on a faster, harder surface.  With its small court and lack of walls, players must have good ball control, precise passing and are constantly required to make quick decisions and find creative solutions.  These technical and tactical challenges result in a more rapid skill development than regular soccer training.  Futsal training and play dramatically improve a player’s skill set; first touch, passing skills, dribbling skills, vision, movement off the ball, goal-scoring acumen, and split-second decision making.

SportHQ Futsal Academy is played during the Winter and Summer off-seasons of outdoor club soccer.  Our Academy players will have 1 practice a week with multiple games throughout the season. The players will participate in Durham Futsal League (Home games and SportHQ) regional and local tournaments/showcases with the opportunity to play in United Futsal’s World Futsal Championship.

Our Summer Season will have 4 Divisions for both Boys and Girls:

Summer Season- May – August  (No games on 4th of  July weekend)

Each Division will have a max of 20 pool players. Two teams will be made from the pool of players and compete in games and tournaments. At the end of the season players will have the opportunity to participate in United Futsal’s World Futsal Championship! Check out previous Worlds!

*Team entry fee for the World Futsal Championship will be split among the players selected to represent SportHQ at the tournament in Orlando, Florida.*

Pelada is a Brazilian term used for street soccer. It has been part of many different cultures around the world and has attracted players day and night for decades years. Players like Romario, Ronaldinho, Messi, Ronaldo, Iniesta and many other soccer legends played in the streets. Pelada refers to the different kinds of pickup soccer games played in parks, gyms and in the streets in countries across the world. The defining character of Pelada is that it is free from the restrictions of usual soccer games such as referee’s, boundaries and positions.

Creativity is difficult, if not impossible, to teach. It can only be encouraged by providing the environment that helps foster it, one that rewards risk-taking, imagination and inventiveness. This “street soccer” environment is crucial for developing youth soccer players. It  not only enables them to try new things and be clever on the ball while having fun but it gives them the opportunity to develop at their own pace and build confidence. It demands that players  continually solve soccer-related problems on their own, which helps them develop their independent decision-making skills through trial and error. But most important, it allows young players to enjoy the game for what it really is – a game.

We will be capping player limit to 20 players so register now!

My children have been coming to SportHQ for years. It did not matter if we were coming for a performance training session, futsal league or summer sports day camp, it was always a great experience.

I like how Taylor helps us through the drill/workout, not just telling us what to do at the beginning, but also correcting our errors throughout the workout.

It has been an excellent experience for my son. He is getting great results and it is boosting his confidence. Taylor is fantastic.

Graham is a very talented trainer and advisor. We are better every time we work with him. SportHQ is a good facility for him to work in.

The Adult Strength and Conditioning class is fantastic. The trainers do a great job leading the group and pushing everyone to improve themselves. The classes are held at several different times every day, so there is plenty of flexibility to fit a class into your schedule. Highly recommend for beginners up to experienced athletes. The trainers will coach you based on your individual ability while still training as a group. Lots of fun.

We loved our week at SportHQ track out camp! My son had a blast and enjoyed playing a bunch of new games. We will definitely be back.

My son loves this places and the folks here really keep the kids involved and active. Great group to work with kids on exercising and sports!!! Keep it going!

My son loves it there! I love that you can buy “weeks” but use the days as needed. We rarely need camp all 5 days so this works out really well for us!

My son asked to go and he can go anywhere he wants & he had a blast and wants to come back next week.