SportHQ is Cary’s premier training facility with access to a variety of fields- Grass, Turf, Hardwood, and Indoor Turf. We offer youth technical soccer training programs as well as leagues and tournaments for youth and adults.

What is Technical Soccer Training? 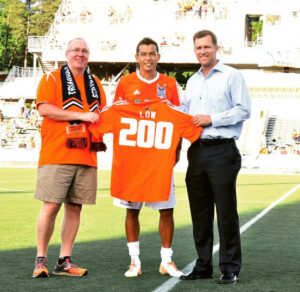 Our Technical Soccer Training focuses on sharpening fundamentals as well as developing and maintaining ongoing success for beginner to advanced players. Our year round, monthly themed training sessions last 1 hour and supplement players’ outdoor club practices during season. As a soccer player, team practices. scrimmaging, and tournaments are fun but chances are that you’re not getting enough touches on the ball. For many players, the work they get through the week is simply not sufficient when it comes to skill development.

Our goal is simple: to bridge the gap between team practices and individual development.

Our unique monthly themed training sessions are designed for players to think with an attacking mindset with and without the ball. Players, ages 6-14 of all different skill levels will be challenged, learn explosive moves and learn a different attacking mindset while playing. If your child is just starting or on the clubs top team, SportHQ is the place to bring them. 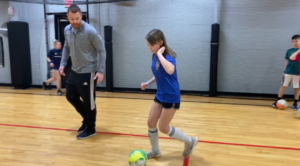 Our program is designed and coached by an experienced veteran of the game – Kupono Low. His resumé includes over 15 years of professional play, including international appearances for Puerto Rico, and 10 years with the NCFC (previously known as Carolina Railhawks). Kupono brought together his decades of playing and coaching experience into a unique and effective philosophy.

We offer 2 curriculum-based monthly program as well as the option of individualized personal or group trainings.

BRIDGING THE GAP BETWEEN TEAM PRACTICE AND INDIVIDUAL DEVELOPMENT

Our Pros and Champions Programs provide the option for players and parents to choose which days work best for their schedule.

Both programs focus on the development of each individual player in a group setting.

Recreation to Classic/Academy players will learn, develop and sharpen their technical skill set.

Please take the time to call or email us for more information!

Call to reserve an hour of personal or group training

Teams will have 9 practices and 8 games in 9 weeks

Games and practices will be played on our outdoor turf fields.

Teams will have 9 practices and 8 games in 9 weeks

Games and practices will be played on our outdoor turf fields.

March 9-May 8 (No games on Easter Weekend)

Register Here
SportHQ hosts the only 5v5 outdoor soccer leagues in the Triangle. These games are played outside under lights on turf and grass fields.  Our Leagues will run during the Fall,Winter,  Spring, and Summer seasons. Each team plays a guaranteed 9 games in our 10 week season (8 league games + playoffs).

♦ Casual: (Monday Nights) This division should be played by recreational players only to allow players that are new to soccer or less experienced / skilled players to play a friendly game of soccer.

♦ Competitive: (Tuesday Nights) This division should be played by experienced (youth, high school, or college) players or very athletic players that are looking for a competitive game built around other strong teams.

♦ Elite: (Thursday Nights) This division is our most intense and competitive division. With experienced teams and players, this division offers a consistent high level of play and very competitive games, best suited for players who have played collegiately and/or are in good physical condition.

♦ Over 30: (Wednesday Nights) Our Over 30 Division will be for teams that have all players 30 years old and over on their team roster.

♦ Over 40: (Friday Nights) Our Over 40 Division will be for teams that have all players 40 years old and over on their team roster.

*Teams can roster all men, all women, or coed.*

Due to COVID-19 SportHQ will be having our Winter Futsal League outdoors.

Playing futsal is one the best ways to develop your soccer skills.  Futsal is a fast-paced game played with a weighted, smaller ball on a faster, harder surface.  With its small court and lack of walls, players must have good ball control, precise passing and are constantly required to make quick decisions and find creative solutions.  These technical and tactical challenges result in a more rapid skill development than regular soccer training.  Futsal training and play dramatically improve a player’s skill set; first touch, passing skills, vision, movement off the ball, goal-scoring acumen, and split-second decision making.
Smaller teams sizes allow players to get more touches on the ball and increased opportunities to score goals.  It is not uncommon for each player to have 750 ball touches during a single futsal session — which is in contrast to 60 to 90 ball touches in an outdoor soccer practice session.

My children have been coming to SportHQ for years. It did not matter if we were coming for a performance training session, futsal league or summer sports day camp, it was always a great experience.

I like how Taylor helps us through the drill/workout, not just telling us what to do at the beginning, but also correcting our errors throughout the workout.

It has been an excellent experience for my son. He is getting great results and it is boosting his confidence. Taylor is fantastic.

Graham is a very talented trainer and advisor. We are better every time we work with him. SportHQ is a good facility for him to work in.

The Adult Strength and Conditioning class is fantastic. The trainers do a great job leading the group and pushing everyone to improve themselves. The classes are held at several different times every day, so there is plenty of flexibility to fit a class into your schedule. Highly recommend for beginners up to experienced athletes. The trainers will coach you based on your individual ability while still training as a group. Lots of fun.

We loved our week at SportHQ track out camp! My son had a blast and enjoyed playing a bunch of new games. We will definitely be back.

My son loves this places and the folks here really keep the kids involved and active. Great group to work with kids on exercising and sports!!! Keep it going!

My son loves it there! I love that you can buy “weeks” but use the days as needed. We rarely need camp all 5 days so this works out really well for us!

My son asked to go and he can go anywhere he wants & he had a blast and wants to come back next week.